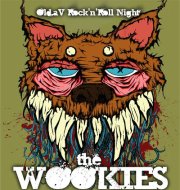 Two and a half hours of pure energy!

In 2003 Francis (Vocals), Antonio (Drums) and Joseph (Bass), after the common experience in a punk rock band, they decided to enlist John on guitar and form a new group. This is how the Wookies. The group revisits the classic Rock’n’Roll of the 50s with a style and a sound very punk rock. In 2006, John left for study and is replaced by Salvatore Luzzu.

With his arrival, the group changed its sound considerably away from the start punk rock and inching closer to the typical sound of the 50s. In the summer of 2007 created the first original pieces and are recorded in a demo, “Please … try this! “that will be distributed during the concerts. In 2008, the four pieces of the demo is recorded with new arrangements along with 6 other unreleased tracks. The result is the band’s first album, “It’s not our fault”, which will be made available to all on Jamendo. In September, Joseph moved to London and was replaced by the current bassist, Salvatore Cuccuru.
In October of 2011 Salvatore leaves and is replaced on bass by Andrea Satta.