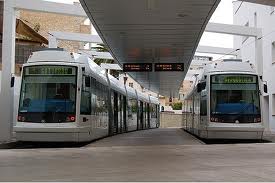 Finally, as of today November 19, 2012, as announced yesterday by Mr. Carlo Poledrini General ARST round table at the Festival of Cagliari Scirarindi Fair will officially carry bikes in our Metro, we believe it can become a very important date and consider fully in another battle won, after years of requests and initiatives, with the help of the new city administration and the warm reception by the Management of the regional transport company ARST operating the service. From tomorrow on the meter of Cagliari and also free for the first month, you can carry No. 2 bicycles on each tram, with the exception of the hours 7.40 to 8.40, 12.30 to 14.00 on weekdays for the period school.

Each rider may bring a single bike, which after the first month FREE will have to pay a travel equal to their own. While folding bicycles placed inside a carry bag or in any case in dimensions cm (110x80x40), are considered as hand baggage for which there is free transport, can be transported up to a maximum of 1 bicycle for each owner.

The bike on the tram remains under the strict supervision of the OWNER, who is head of the civil liability for damage caused by bicycle or injury during the trip. Children under 12 years can carry your bike ONLY if accompanied by an adult;

The incarrozzamento bicycles may only be the double doors marked dall’apposito pictogram must be placed on the wall in the space reserved and marked with the pictogram of a bicycle.

We consider this very important initiative, also in view of the opening of the new sections of the line that connects from next year in a sense, the country of Seventh St. Peter, that with the new bike paths in the program will link with neighboring countries. In the other direction will connect the University campus and the University Hospital, which in turn with the bike paths will be reached in a short time in the village near Sestu. Ultimately allow citizens Cagliari hinterland to leave home by bicycle, to reach the tram, take your bike on board to get to the center of Cagliari, turn around the city, go to work, make purchases and return to their country always in the company of their beloved bicycle.