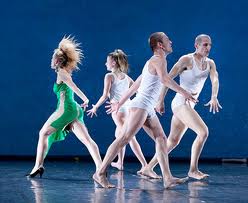 “The theme of love education of four young tender and seditious” angels “the pursuit of happiness, is expressed with autistic gestures first, then quickly, mad, making faces and zampettii, races and softness, with hugs and kisses, games and whims : a swarm of everyday life and natural little at a time, by awakening the child to the relative calm sensuality adolescence final turns into an uproar. toys scattered everywhere, cream sprayed at
off, beer and cotillion, glamor poses for photographs, a stuffed cat to cover the sudden nakedness of a dancer (his debut was a real cat, as in the flesh was the baby who would sneak on stage, here replaced by a cry), lemons rolling as symbols of a Mediterranean culture to affirm.

Slowly, including slowness of movements, stiracchiamenti, attitudes canines, and chirping of crickets and chirping of birds such as carpet of sound, it is to compose a choral fresco, bright, which releases a primordial energy. A rough innocence that leads to arrogance, transgression, winks, with tremors of trepidation and inner fragility, rendered with compelling movements and minimal, with diagonal lines circling and non-formal. The post-punk era in which “Heat” was born, is still present in the techno music blaring – alternating heavenly melodies – in the look of the girl with the acid colors that wanders like a model on high heels and in wild party of a youth eager and unruly. Without falling into parody of adolescence, in the act didactic, or gratuitous provocation, Cosimi maintains a polished state of mind in the individual personality well silhouetted which results in a high-voltage dance theater, which, consciously or not, have looked at many actors today. “