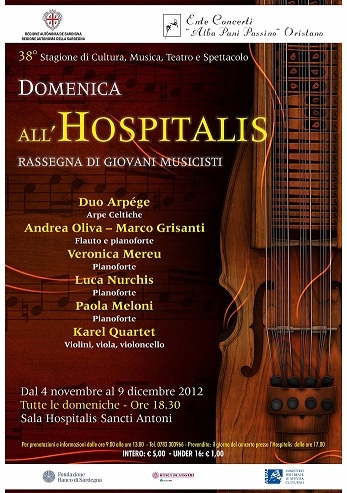 Continue the third musical event on Sunday afternoon at the conference hall of the ‘Hospitalis Sancti Antoni. L ‘meeting scheduled for November 18 at 18.30 is with the young pianist Veronica MEREU.

The concert is organized by Concerts “Alba Pani Passino,” sponsored by the Autonomous Region of Sardinia, the Fondazione Banco di Sardegna, the Ministry of Heritage and Culture and the Bank of Sassari

VERONICA MEREU – Born in Cagliari in 1986, and completed his language, and in 2009 he graduated with honors in piano at the Conservatory “G. Pierluigi da Palestrina “, under the guidance of Prof. M.Teresa Zanda. Participate actively in events and projects organized music from the Conservatory, including: a tribute to “Franz Liszt” and “Piano Festival dedicated to Dino Ciani” (2011), a tribute to “Chopin and Schumann for the bicentenary of the birth” (2010) and “The Soloist and Orchestra” with the Concerto for Piano and Orchestra E.Grieg (2009). He has participated in various training courses including piano: Master Class with Fabio Bidini, Benedetto Lupo, Claudio Martinez, Gerlinde Otto, Rares Saghin, Pierluigi Shirt, Stanislav Pochekin, Franco Scala, Lola Tavor. He obtained the First Prize of its category with a special award for “Best Instrumental Interpretation” at the 3rd Regional Music Competition “Lanusei (2011) and the Third Prize in ex – aequo in Section piano soloist at the international music competition” City of San Sperate “after taking a solo concert for the exhibition” San Sperate Piano Festival 2011. ” In 2010 he began his piano training and teaching in Milan, with the pianist Lola Tavor, as professor of piano with the Suzuki method, specifically for children, which has achieved the qualification (3 levels), recognized by the European Suzuki Association. In 2011 he was professor of piano at the Suzuki School of civic Cagliari. Since 2004 he is also involved in several projects of pop music: he has worked with various configurations of the landscape island, performing as a singer and / or pianist, presenting a repertoire characterized by personal arrangements in acoustic. He is currently finishing the two-year higher specialized in piano with Professor M.Teresa Zanda, is a professor of piano at the preparatory school to address civic L. Rachel Quartu S. Elena and he is improving with the pianist VĂ©ronique Bonnecaze, at the Ecole Normale de Musique A. Cortot in Paris (with scholarship from the Zaleski Foundation).