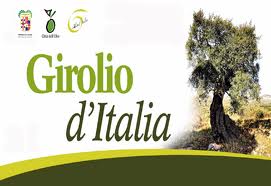 Back Girolio of Italy in 2012 and makes a stop in Sardinia, Oliena on November 18. The event organized by the National Association of Oil City was presented this morning in Rome in Parlamentino the Ministry of Agriculture, Food and Forestry.

The decision to make a stop in Oliena, land particularly suited to growing olives is very significant: the theme of the 2012 Girolio of Italy is the landscape with olive and its immense olive of rare beauty embodies the ideal place which accommodate celebrations and moments of discussion on the topic.

The program Oliena. The stage will open as consuetidine with the greeting of the authorities, the flag hoisting of the Tricolour and Oil City, the pitch of the national anthem and the ceremony of handing over between the host delegation the previous stage and Oliena, or the signature of the parchment-witness by the Regional Agriculture and agro-pastoral reform Oscar Chierchi and the donation of a olive tree in a school of the territory by the delegation of Brisighella and Imola, where the caravan park has green before landing in Sardinia. To animate the day, there will be local groups with folk dances and folk songs but also markets, booths selling local handicrafts and local products, tastings and sales – in the Cortes of Oliena in the city center – the Sardinian olive production from all 29 regional partners, who will be invited to participate in the stage of being Oliena representative of the entire region. The program also includes guided tours of the mill, the olive-growing holdings and olive groves of the Valley of Lanaittu, harvesting and pressing demonstrations and cooking classes open to transmit the culture of popular cuisine, authentic example of the Mediterranean diet, which focuses on the preparing the extra virgin olive oil.

The transition event of Oil City for the Region of Sardinia could be the launching pad for a series of initiatives to enhance and promote the olive culture in the territory: the first of these, the proposed construction of an eco-museum City of Oil and olive as a form of economic and social development for local people, in accordance with the policies of environmental protection, but also the “Adopt an olive tree in Oliena”, to enhance the Valle Lanaittu and introduce more at the bottom of this – of almost 40 hectares – from historical and environmental value, where it is cultivated in particular white oil – scientifically known as Bosana – Black and Oliena, typical local biodiversity.

That the 2012 edition will also be a dedicated technology and new media all steps will be followed by foodblogger and not lose any of the events related to Girolio of Italy’s National Association of Oil City will launch the application for smart-phones that allow you to discover the excellence of the Italian territory through olive trees, itineraries related to the representation of the olive oil and the art and culture, restaurants and oil-producing excellence.

15.00 – Conference “The horse on the care of the blacksmiths, the testimony of the overwhelming passion of the most famous jockeys of the Palio di Siena” Library MCR Via Vittorio Emanuele, 72

17.30 – Demonstration of shoeing the horse by the master blacksmiths – C.so Vittorio Emanuele

During the day entertainment along the streets of the historic center by folk groups.

10.00 – Opening of “Cellars of Oil” that host the producers of extra virgin olive oil in the center with samples and tastings.

10.00 – Baptism of seat: children on horseback accompanied by the jockeys of the Palio di Siena in collaboration with Ass. Caddu it up on the choir and Equiturs – Piazza San Giuseppe

11.00 – Opening with the greeting of the authorities, the Tricolore flag-raising and Cities oil; exhibition of Sassari Mechanized Brigade Band; handover ceremony between the Delegation host the previous stage and Oliena, planting two trees in memory PS Agent Zanda and Marco de Brigadier Chief of Police Paul Corbeddu, victims of duty.

At 15.00 reopen the “Cantine” for tasting and sale of extra virgin olive oil

Starting from 16.00 – tasting sessions led by the tasters Laore

17.30 – Demonstration of shoeing the horse by the master blacksmiths – C.so Vittorio Emanuele

20.00 – Gala Dinner: “The Extra virgin Oliena in the recipes of the stars of the Chef” with Cristiano Andreini, Gabriele Piga Giorgio Bardi and with the support of the staff of the Olympic Kitchen – (Bronze Medal in Erfurt 2012) led Prof. Alessandro Tronci (Istit. Hospitality TortolĂ¬) – MC Room Library Romagna, Via Vitt. Emanuele 72 – Participation by appointment c / o Presidio Tourism Tel 286 078 0784

During the day, tasting and tasting of olive oils and other companies Oliena Oil City participating in the event, visit the mills with chance to witness the pressing of the olives, entertainment by folk groups and singing tenor during ‘ whole day. 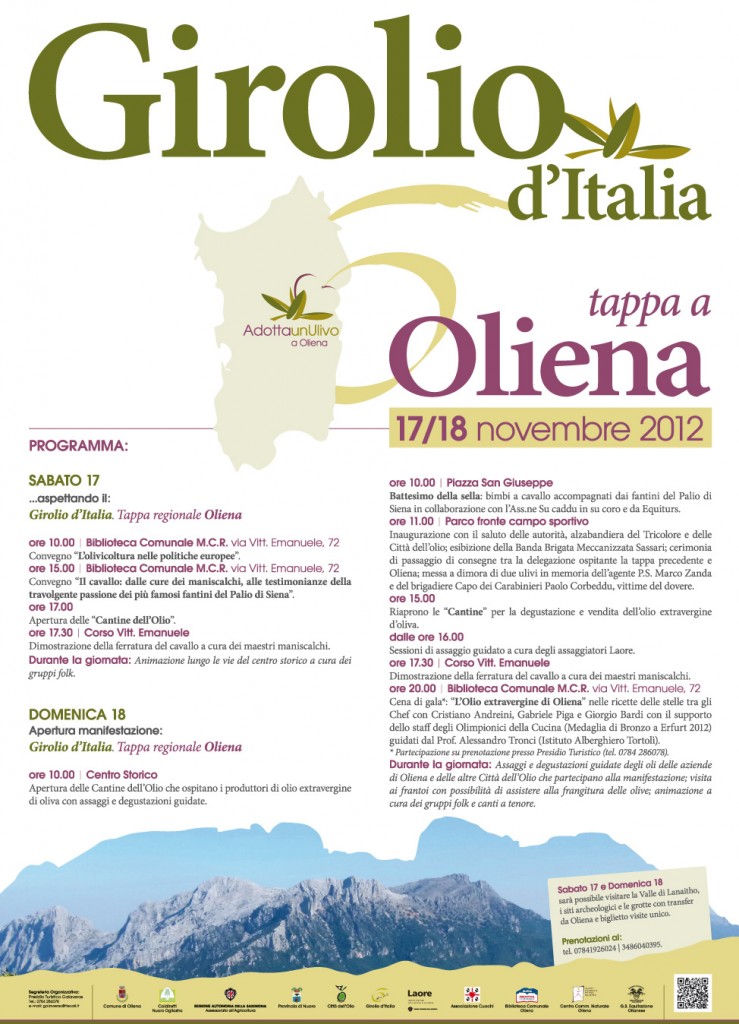 Saturday 17 and Sunday, September 18th you can visit the Valley Lanaitho, archaeological sites and caves with transfer from Oliena and ticket requests only. For reservations tel. 3486040395 07841926024.