THE TEACHER AND OTHER – MASSIMO THEATRE – CAGLIARI – 20 TO 21 OCTOBER 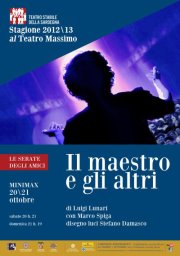 The tradition of the comic novel” “understood as humorous portrait of that world colorful and a bit ‘crazy that is the theater, which boasts among its most recent examples of theatrical Bulgakov’s novel, lives in The Master and others, that Louis Lunar dedicated to the greatest Italian theater and its greatest director. Marco Spiga offers a delicious portrait of Giorgio Strehler, and self-centered tyrant, obsessed with theater and beauty care.

Moon was part of the Piccolo Teatro in Milan for almost two decades,
working closely with Paolo Grassi and Giorgio Strehler.

In this fun fast paced story, the author uses his deep knowledge of the environment and the characters, to tell – with a hint of humor overwhelming effectiveness – the “revolution” that contrasts with the Master (the celebrated director of the leonine and the picturesque language ) the large crowd of others: our employees, employees of the theater, the most trusted friends … all gradually involved in the incredible project to build in the same theater a dramatic society that distributes a bit of glory to frustrated assistants, managers repressed, to the dusty employees, to the dark backstage workers.

“But really, what the fuck do they want?” Immediately begin the fireworks, and here, to the turning end, the reader will no longer possibilestaccare eyes from the page of this booklet, a real masterpiece of satire and humor of ‘

“The Master is Strehler, I agree. But the reader may very well not saperlo.PerchĂ¨” The Master and the other “is a stand-alone book, with characters able to be of interest, and how, even those who have never crossed the threshold of the legendary Theatre Via Rovello ”