THE OUT LIVE – THE BOHEMIEN – CAGLIARI – SATURDAY NOVEMBER 24 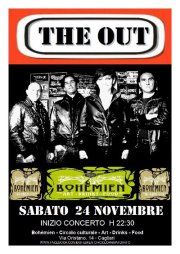 The OUT is a rock band formed in Cagliari in 1994.

The OUT are among the most successful groups in the history of the island’s cover band: From the first debut at the “Jazzino” in January of ’94, playing music for meetings, community centers, various competitions for beginners groups, street festivals and private numerous bars and clubs all over the island, motorcycle rallies, in kiosks Poetto and nightclubs.

In 2005 (after 11 years of concerts) recorded a live with their most recent proposals, under
lineando the desire of the group to dance and entertain his audience.

After a break of two years (2008-2010) reappear on the scene with the formation of four elements:

The OUT propose a repertoire of covers chosen from the classic rock from the ’60s to the ’90s.

The group has softened his sound by directing it towards dance and pop-rock sound, opening thus a wider audience.

the BOHEMIEN – VIA ORISTANO – CAGLIARI