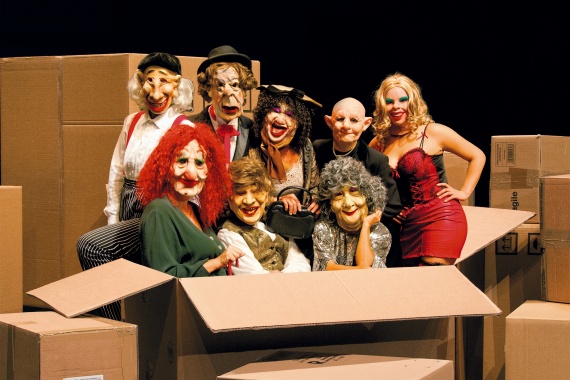 There is an air of demobilization, the theater could definitively closed. The theater Actores Alidos square Helena announces the beginning of the battle urgent for resistance with his latest production, which has spent the last six months of passionate and intense theatrical research: (S)-mobility action – Exposure s / compound bodies in r / existence said / mined in the theater. The show, conceived for thirty spectators every night, will debut on Saturday 1st December at Teatro di Piazza Alidos Helena and will be repeated every night until December 16, 2012 at 21:00 and Sunday at 18:00.

Inspired by the artistic production and the ethics of the expressionists, authors of works by the genius unsettling and raw, visionary and irreverent, and in particular the German movement Die BrĂĽcke (The Bridge), (S)-mobility action is designed for a large fresco paintings , in which accentuated the emotional values and exaggerated expressiveness of gesture and image, actors and the audience went as through various exhibition halls, a microcosm of strong metaphorical situations inhabited by characters without psychological connotation, nameless and personality but representative of humanity.

Sound bounces between continuous and sudden revelations of meaning are unmasked models and ideals of a society degraded and addicted to every abomination: war, exploitation, child slavery and sexual violence, corruption, racism. It is the “farce of life” where the characters further strengthen the view of nature dream of existence, where they eventually “will only smoke, dust, darkness and wind.”

The staging of Gianfranco Angei for the eight actors of the company (Valeria Pilia, Manuela Sanna, Valeria Parisi, Roberta Locci, Manuela Ragusa, Giulia Paderi, Ivo Randaccio, Andrea Atzori-scenes technical direction and production of Anthony Belardi, lighting design and sound of Luke Lai), with the unusual involvement of the public places accompanied by concrete and metaphorical theater, leads to scrutinize and reflect on the implications of wealth, on the deepest aspects of the person, the existential drama of the individual and artistic representation . Not a representation of the visible, but a perception, subjective and visionary of the events of our times, played with the taste of irony and desecration, distortion and grotesque.