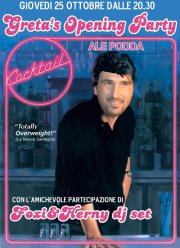 Thursday, October 25, take note of this date. Keep free and if you have already made commitments, delete them immediately.

Finally reopens Greta’s, your favorite place in Via dei Genovesi 111/117.

The fall season opens with an event that will shake all your certainties when it comes to going out at night during the week.

After this experience even more wild and outrageous nightlife Cagliari will seem like a night at the Bingo Palace in the company of your aunt.

Surprises are so many that do not really know where to start.

A preview for the first time in Cagliari and exclusively for Greta’s, subversive idea that disrupts the usual tired rituals of night life: from 20.30 aperitif (lavish) buffet free!

Probably only the most updated and trendy among you who read regularly GQ and Men’s Health, had heard of the Milanese aperitif, but who would have imagined that this extravagant custom would eventually landed in Cagliari?

Here he does not drink anybody yet, only Greta’s.

Pride of the mind that is able to conceive an idea so revolutionary Alessandro Podda, the rottamatore the old way of thinking about the entertainment (even if physically now more than Renzi reminds Fiorito Franco), who at least had the good taste to spare one of the disturbing neologisms based on the prefix “Aperi-” that usually accompany such events.

The (magnificent) buffet, strictly based on ricotta salata (so that the third bite your mouth will be transformed into a miniature version of the Sahel desert and you are willing to indebitarvi just to quench your thirst), will be accompanied by a background music quite up, in the sense that rather than feel it will move en masse to the bar.

And here another big surprise: behind the console boasts a different feel, finally new faces and space to young talents with DJ Foxi & Herny, two characters who put music since the time of the infamous CAF (Craxi-Andreotti-Forlani ) and, in the case of Foxi, it is exactly the same music at the time.

And if you really want to pick any in search of exotic flavors, remember it’s at your disposal prosciutteria with its unusual mixed platters and bar with a selection of original cocktails like the mojito, which probably only those who have had ‘ opportunity to visit Cuba know.