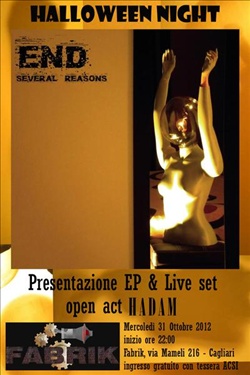 The E.N.D. will also present their first EP entitled “Several Reasons” The Night of the Fabrik will HALLOWEEN ‘theme “ROCKSTAR”, and then’ welcome the mask, possibly of your favorite rock star!
The mask and ‘welcome but NOT required for those who want to participate in this party!

The E.N.D. (Electric Noise Device) born in October of 2008 as a project of the brothers Asunis (Stephen Gabriel, guitar and drums, respectively) and Angelo Argiolas the low elettrico.La primary source of artistic inspiration of the combo are the 80s, in fact right from ‘start performing songs of the greatest exponents of the scene post-punk and new wave international and national levels, but also indie-wave band leading contemporary.
In the summer of 2009 begin the first live appearances and the first work in studio.Dopo various line-up changes, the band replaces Fabio Desogus (Old Sparky) to synth and Julius Muscas under solista.Ottobre 2012: released “Several Reasons” , EP 3 pieces.

HADAM: they are an instrumental trio influenced by post-rock and the screamo music. We are three friends who try to do a little ‘noise.