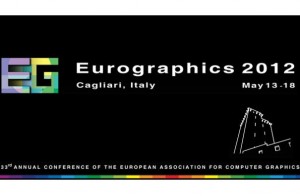 For the first time in Sardinia, the most important European event in the field of computer graphics and organized by CRS4 University. Cagliari Congress Center Messe 14 to 18 May 2012. The world’s leading experts in computer graphics will be in Cagliari in the next few days to participate in “Eurographics 2012,” the important global event organized in Europe, the most important and prestigious in the industry, which officially begins Monday, May 14 and ends Friday May 18.

Expected in the Sardinian capital, among the many dozens of scientists who will present their latest works, Jacopo Pantaleoni, NVIDIA researcher who has worked on a systems view of the film “Avatar”, and Paul Debevec, a professor at the University of Southern California wizard of motion capture, which deals with artificial lighting and reconstruction of human movements, including the principal Scientific Advisors of Hollywood (his special effects in films like “Spiderman 2″ or “The Curious Case of Benjamin Button”) and winner of a technical Oscar in 2010 for having developed the Lightstage, a system used to render photorealistic digital faces.

In Eurographics Leila De Floriani also be an intervention, a professor at Genoa and at the University of Maryland, and Holly Rushmeyer, a professor at Yale after a major partnership with IBM both expert modeling material, study the response of the materials they give birth, even in reference to the works of art.

This year the annual meeting of the “European Association for Computer Graphics” (Eurographics) is now in its 33th edition. And ‘organized by the Visual Computing Group of CRS4 and the Group of Computer Graphics, University of Cagliari and is entirely funded by the proceeds of the conference registration fees and sponsorship.

Will be attended by about 400 people, including representatives from academia, research centers and companies around the world. The start of the program is scheduled for Monday, 14 ore17 Pasolini in the Hall of Congress Centre of Cagliari Fair, with a preview of all the research that will be presented during the week and recognition for the Fellows and PhD (the best thesis PhD on the topic). It is only the third time the conference takes place in Italy and for the first time in Sardinia. The venue of Cagliari was Eurographics Association’s decision on the specific request of CRS4 (Visual Computing) and University of Cagliari (Department of Mathematics and Computer Science), participating actively in the international research community in the area.

This year the scientific program of the event, as never before, will be accompanied by an important industry and technology program, which sees the participation of many industry-leading industry. Were also involved Sardinian companies, who will have the opportunity to develop partnerships and agreements with the most consolidated in the world. “In this field as in others – explain the organizers of the event – it looks very good operation of the synergy between the University, which trains students, and cutting-edge research and applied contexts CRS4 performed by both scientific and industrial “.

In Eurographics 2012, the group of Richard Scateni, professor of the Department of Mathematics and Computer Science at the University of Cagliari, present as single research group from Sardinia, a scientific work in the context of international relations, while the Visual Computing Group of CRS4 , directed by Enrico Gobbetti, will present, in collaboration with NVIDIA, HP and projectors, the leading system for interactive exploration of large data volumes.

Events
Simultaneously with the conference, at the facilities of the T Hotel in Cagliari, two other scientific events will take place in parallel: EGPGV 2012 (13-14 May) on parallel graphics and 3DOR 2012 (13 May) that conducts research on the Internet of 3D objects.

Inside the exhibition space set up during the main event, will be displaying some of the best scientific work carried on by local businesses. In addition, Sardegna Ricerche, in partnership with EEN (Enterprise Europe Network) held on 16 and 17 May, a “one to one meetings”, ie meetings between companies / researchers and local participants in the conference main in order to create opportunities ‘business and to enable businesses and researchers Italian, and Sardinia in particular, the project partners to identify and initiate international collaborations.

Recruiting
In Eurographics 2012 will also attend some of the most important companies of computer graphics, which will be in Cagliari to do recruiting, that is, to select young talents. In this way the event is also an important showcase for specialists and experts in computer animation.

The computer graphics are the fundamental background of video games and animated films, is the force that drives a market can move billions of dollars.

Organizers
The Visual Computing Group of CRS4 (Research Center of the Technological Park of Sardinia), led by Enrico Gobbetti is involved in research and development of innovative tools for interactive 3D scientific visualization and visual simulation. Some important research in progress is related to the visualization of large 3D models and development of interactive systems based on advanced 3D displays “light-field” new concept for cultural heritage projects in the field of medicine and visualization of large land large-scale model of the planet Mars 3D and Sardinia.

Within the University, Department of Mathematics and Computer Science is active research group in Computer Graphics that, under the guidance of prof. Scateni Richard, in his few years of operation has already achieved significant milestones and has been the springboard for the careers of several brilliant Sardinian students who continue their research in foreign laboratories.

The conference language is English and is restricted to subscribers.

Colleagues interested in an interview with the presenters are asked to contact Sergio Nuvoli Greek Meloni and to schedule an appointment with them.