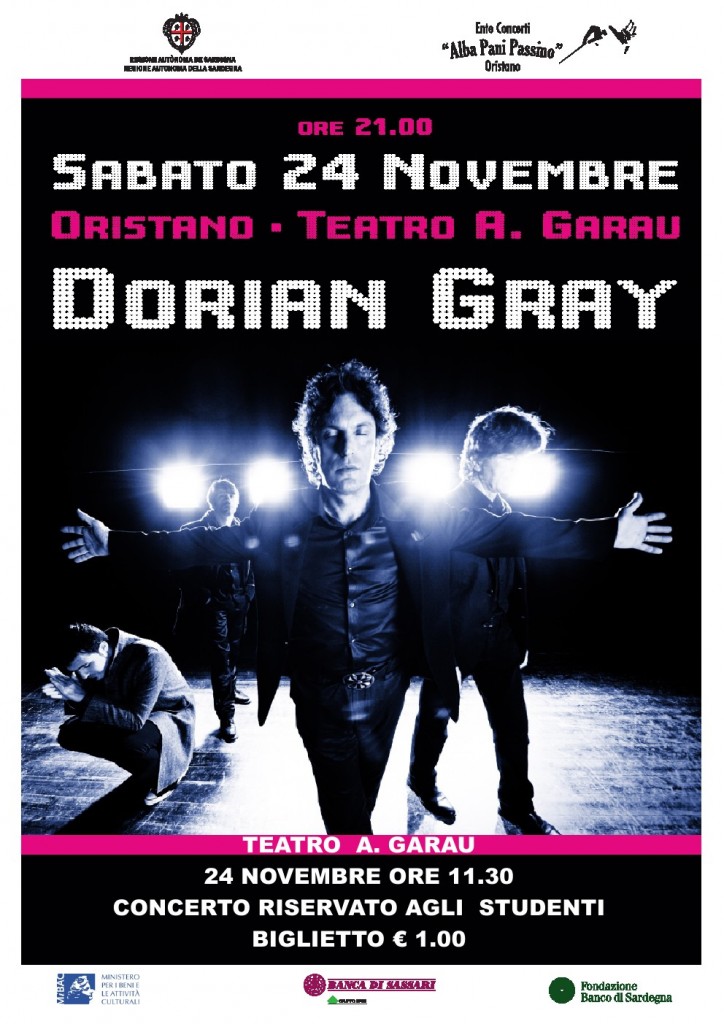 The concert is organized by Concerts “Alba Pani Passino,” with the support of Fondazione Banco di Sardegna, the Autonomous Region of Sardinia, the Ministry of Heritage and Culture and the Bank of Sassari

Box Office:
The day of the concert at the Teatro A. Garau from 10.30.
The group
Dorian Gray is not only a literary character, but the symbolic representation of all that exists outside of space and time. The band that bears this name comes from one of the most fertile of the Italian season – the nineties – and his life through memorable tour (the first European band in mainland China), quality songs (Lunezia Award 1999 conferred by Fernanda Pivano David Catinari) and a discography nourished and original (Shaman, 1992; Matamoros, 1995, The poison of the mind, 1997; Overtime, 2003; Perhaps the sun hates us, 2008). It is from the latter album, released in 2008, begins a new course of Dorian Gray, which includes concerts in Italy and abroad – London, Berlin, Hamburg – and the important lifetime achievement award instituted for the band. The last album, “The skin of the Spirits”, released in

March 2011 and well reviewed in the national press, has a renewed line-up, which features the name of Andrea Screws (ex Afterhours), new bassist and co-producer of the disc.
The Program
Manicure
AutodafĂ© ‘
Not ‘beautiful?
BIP
Fifth state
You spin me round
01/01/11
Perhaps the sun hates us
Chrysalis
2/4 of Infinity
Smell like then spirit
Does not exist
The King of Comedy
Dear Prudence