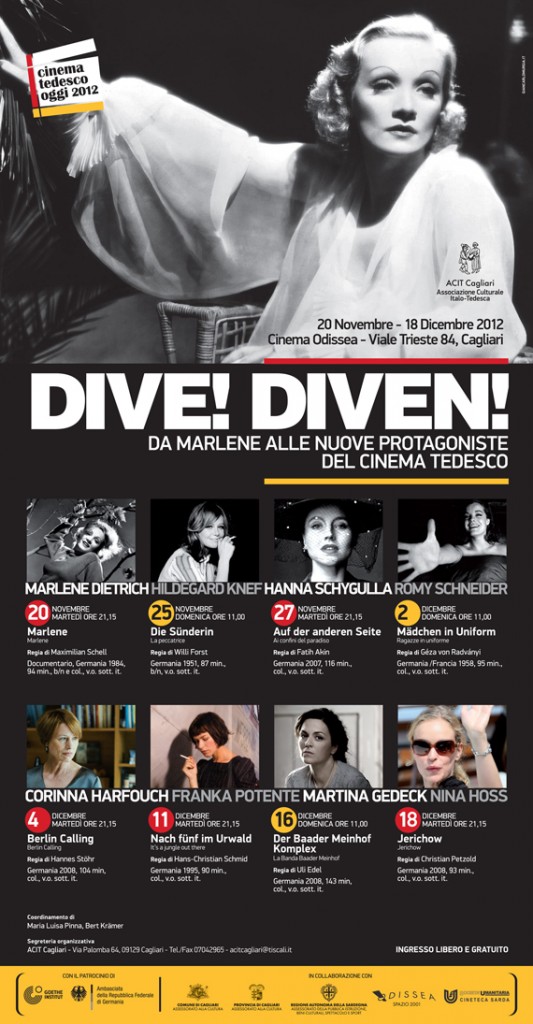 By Marlene to the new protagonists of German Cinema

“Only with the voice could break your heart. It also has a gorgeous body and face of a timeless beauty. ” With these words, dedicated to Marlene Dietrich, Hemingway summed up the essence of every diva worthy of the name: charm capable of crossing time and space. To pay tribute to some of the actresses most representative of the big screen, the ACIT Cagliari dedicating the twelfth edition of “German Cinema Today” to DIVE! Become! Marlene from the new stars of German cinema.

The event offers eight films, some of them unpublished or little known to the Italian public. The first four protagonists as the most famous icons of the past, Marlene Dietrich, Hildegard Knef, Romy Schneider, of which this year celebrates the anniversary of his death, and Hanna Schygulla. The other four bring to the fore a new generation of actresses who won international acclaim: Corinna Harfouch, Franka Potente, Martina Gedeck and Nina Hoss.

Inaugurating the exhibition is of course Marlene Dietrich (1901-1992) in the extraordinary documentary portrait that makes Maximilian Schell Marlene (Germany, 1984). Follows one of the first films produced in Germany after the war, and where the young Hildegard Knef (1925-2002), destined to become the heir to Marlene. We could not miss Hanna Schygulla (1943), the best-known face of the New German Cinema, a singer as well as actress – just like Knef and Dietrich. Romy Schneider (1938-1892), Austrian and German birth of adoption, still venerated by the international public, was presented the first film that finally frees himself from the cliches of Sissi (MĂ¤dchen in Uniform, Girls in Uniform, Germany 1958) .

After four icons of classical cinema, the baton passes to as many contemporary German interpreters, already acclaimed worldwide for their extraordinary charisma and ability to deal with roles never banal: Corinna Harfouch (born in 1954), Franka Potente (1974), Martina Gedeck (1964) and Nina Hoss (1975).

Also this year the screenings will be introduced by experts, critics and film historians. As in previous years, the festival presents films in their original version to allow the public to hear the authentic voices of these great actresses. And as Marlene would be able to break the heart of Hemingway only with his voice, you can bet that his heirs will not be outdone.