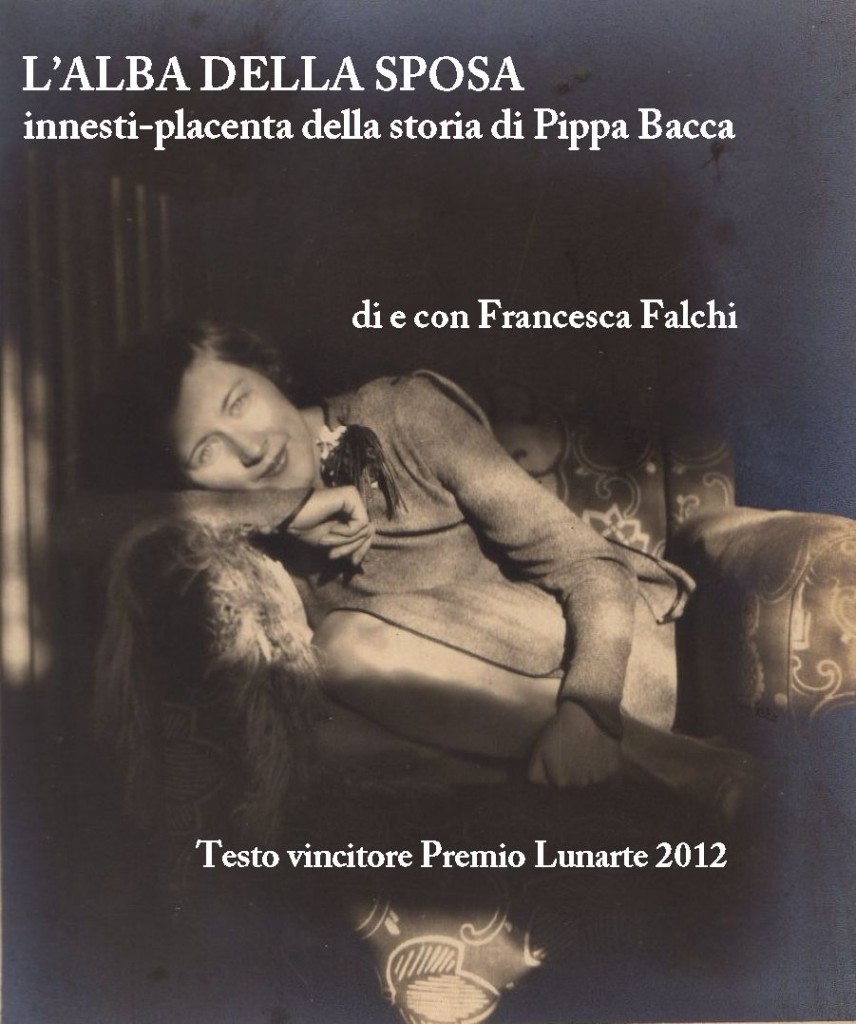 a project of Daniel Ledda

DAWN OF THE BRIDE

graft-placenta of the history of Pippa Bacca

by and with Francesca Falchi

Castle of San Michele – via Sirai

Friday, December 7, 2012 at 20:30 The Crucible presents FIRST NATIONAL Francesca Falchi it DAWN OF THE BRIDE-graft-placenta of the history of Pippa Bacca, text Prize winner Lunarte 2012, in which the actor and playwright Cagliari has created a performance visual-theater to tell the story of the Milanese, who was raped and killed in Turkey in 2008.

Performance is inserted into the contemporary art exhibition Six Memos, born from a project of Daniel Ledda, curated by Erica Olmetto and organized in collaboration with the Municipality of Cagliari, Department of Culture and the Consortium Camu.

The presale will take place at the store Love Retro Alice in Tolu by Sulis 26.

Giuseppina Pasqualino di Marineo moves with the confidence that swings between the folds of her dress. His marriage with the World. It ‘s his spouse. Josephine has sworn allegiance to it its inhabitants Man. There is no fear in his gait immaculate: embraces with hope and love the other, which is the manifestation of her Bridegroom tangible body. In his travel miles of land and water and air, no scratches that trust resulting from a pact between pure. When the unconditional loyalty clashes with the diverted offshoot of the World, Josephine becomes the victim of the loyalty that his belief that nothing can devastate chip finish. The Bridegroom becomes executioner and infidelity takes the shape of a murder. Josephine goes through the stages of the marriage peacemaker and his final frantic and unexpected, without a shadow of repentance. And ‘as if all of a sudden the original act purchases as a result of its ultimate meaning, as if only a tragic epilogue to the epic could give its decision senseless. Josephine has the size of the hero who designs and makes the company even at the risk of his life, whose deeds will eternalize the name and prodigious actions until the end of time. And that infidelity that betrayal become the means to fulfill a destiny that takes the eyes of the features of contemporary myth.

Cagliari, 1970. In 1994 he graduated from the School of Theatre of Bologna. In 2003 he published the essay El juanero Pasolini and Spain. In 2007 he made his debut with his first stage play Frida was born twice, staged by the theater company and Fueddu Gestu. In 2009 he was a finalist with Frida was born twice Award Oltreparola drama. In June 2010 he made his debut with the wolf and the sky barbed. The story of Esther H. Black (Author and artist) on the figure of Etty Hillesum. In June 2011, the host of the show in 2011 with Green Carnation Der puff-first study of lesbians in concentration camps. In September 2011 he was a finalist at the second edition of the Prix d’Autore Drama Outposts with the text Degeneration / Degenderation on the situation of lesbians under fascism. In November 2011, the essay El-juanero Pasolini and Spain comes translated into Spanish by the publisher Alreves of Barcelona. It ‘finalist in the tenth edition of the National Prize of Literature and Theatre Nicholas Martucci-city Valenzano 2012 Actor Award section, with the monologue Joan of Arc (author and performer). And ‘The winner of the Prize Lunarte Festival 2012 with the monologue Dawn of the bride which will debut in December at First National to the Castle of Saint Michele in Cagliari in the project Six memos Daniele Ledda. It ‘Prize winner From Stage to Stage 2012 with the text Funny rabbits-That’s all folks on experiments on Polish students in the concentration camp of Ravensbruck. In January 2013 the show Der puff-sung fragments of bodies interned FIRST NATIONAL debut in the third edition of the festival LOOKS S-VELATI organized by Amber Postiglione and Annalisa Siciliano at the Teatro Two of Rome. In February 2013, will be the guest of MADPRIDE in Turin with Mater Alda, Alda performance of Merini.

Six Memos for the project Danielel Ledda aims to involve multiple types of expression of contemporary art such as music, visual arts, theater, creating one single representation, a scenic structure solid and compact but also dynamic and interactive allowing a repeated use of space host. There are six events during which artists are invited to participate through various forms of expression and the creation of site-specific. Visitors attend the “improvisations sound” installations, sound and action will be directed to establish a dialogue with the audience by involving them in the performance that will intersect the six days of the festival event. Interventions, therefore, will be modeled on American Lessons. Six Memos for the Next Millennium, whose original title is “Six Memos for the Next Millennium”, a book based on a series of lectures written by Italo Calvino in 1985 for a series of six lectures at Harvard, never held by Calvin because he died before. To act as a guide will be just the six characteristics identified and described by Calvin notes in his much-discussed and often interpreted by critics as quality related literature but, in fact, found in every aspect of contemporary reality