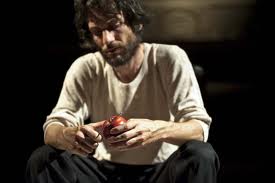 Part of “Theatre d’Autore”, The Crucible promotes theater workshop “Being INSTRUMENTS pure”, directed by Alessandro Berti.
Being pure means instruments do not push the words to the audience, not anxiously look through the rubble of the mind something to express. On the contrary, be pure instruments means leave pass to himself all things: the air first, then singing, body movement, and finally, and in particular the words. Allow this force in transit radiated all around. A pure instrument is silent: it sounds. It is a more simple and strong. A trunk cable is wound by the wind, a flower is open from the sun. Similarly, the integral body of the actor waiting let everything through it, and in this way you show something new, a new voice takes shape, an unexpected gesture takes place. The work will focus on finding a position (for that to happen), spiritual or physical location on the body and the voice playing and finally on short extracts of some of the great texts that allude, in terms not only aesthetic but also existential, this Our play (and in particular the Book of Job and the diary of Etty Hillesum).

It is proposed to pupils and students to memorize a piece of text (to read the references: teatrodipoesia.blogspot.it/p/workshop-2012-testi-di-riferimento.html) on which we will work in the laboratory .

For further information on the contents of the work, please write to:
alessandroberti.mail @ gmail.com

Alessandro Berti was born in Reggio Emilia.Dopo the school of Teatro Stabile of Genoa founded The Dough Community Theatre, which runs from 1995 to 2002 together with the choreographer and actress Michela Lucenti. For the company says, it shows all the shows, among which: Skankrer (1996), Land of Butter (1997), Triumph Anonymous (1999), The agenda of Seattle (2000), The District (2002). From 2003 to 2005, in Friuli, engaged in the construction of a popular theater school attended by one hundred students and students of all ages and backgrounds and Art / Company ‘/ Madness, thematic project on theater and mental health in collaboration with DSM Udine, the community center Balducci and CSS permanent theater of innovation in the FVG.
In 2005 he won the prize with his Gherardi Theatre in Verses, which collects Line (1998), Reviewing the stars (1999), and Simurgh (1999).
From 2006 he began research on the monologue as a privileged vehicle of an intimate dialogue with the public. At this alongside a spiritual path that leads to the encounter with the Christian mystic, in a perspective of contemporary interrogation and religious background, far away as possible from new age syncretism. He studied Chinese and Sanskrit. The first fruit of this research between theater and spirituality in the form of a soliloquy is the original text Border (2006), which debuted at the festival Santarcangelo. Follow a work on ‘Astavakra
Samhita (2007), dialogue medieval Sanskrit, Stone, Plant (2008), the relationship of contemporary poetry with nature, Abandonment to Divine Providence (2009), dramatic reduction of the masterpiece by Jean Pierre de Caussade, Spiritual Combat in front of an Ikea kitchen (2011), original winner of The Theatre of the Sacred 2011. He is currently working on a text on the subject of the Arab Spring commissioned by the Teatro di Roma, Scroll, which will be read at the Teatro Argentina October 4, 2012 and the new chapter of his spiritual theater: a sermon of the great medieval mystic Meister Eckhart.

Info and contacts:
For information and registration, call 3348821892
or write to ilcrogiuolo@gmail.com.
(The working group can consist of a maximum of twelve people).
Registration is open until Monday, November 19