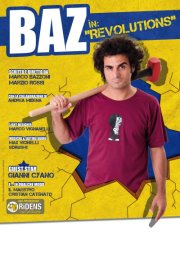 “Baz” in “Revolution,” written and directed by Marco Bazzoni and Marzio Rossi.

The trout took a degree in Albania, the Friends of Maria de Filippi won a San Remo after another, Captain Schettino has written a book … now you do not need more confirmation, the time is ripe for a revolution! After the success of “How I fell in BAZ” (more than 60,000 spectators) and after the experience in the world with the musical “Alice in Wonderland”, Marco Bazzoni, despite the p
PINION negative of his analyst, returns to theaters with the new show “Revolutions”. The comedian Sassari in this new show, written with the mind severely compromised by Marzio Rossi, a neutral response, irreverent and unexpected to a question that no one has ever asked. Finally will be unveiled to the public and to the world the question that creates an eerie shade of mystery about Marco Bazzoni, “but I have real hair or a wig?”. People are so accustomed to the make-up, prosthetics and deceit that he could not longer to separate fiction from reality. The singers are forced to sell records to fake another personality, the soubrette to fill with silicone to look younger, men pretending to be what they are not to get an appointment. But why all this wasted effort? We’ll find out in a show so rich in music, surprises and laughter that even the protagonist often think, “I ought to pay a little ‘more the ticket …” The audience instead, leaving the theater visibly excited, incredulous and eyes full of wonder at the end will not be able to say: “But you know that I gave him a euro to this one! But …
TICKETS: Adults â‚¬ 10,00 Reduced â‚¬ 7.00 (children under 10 years)