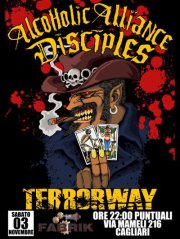 SAT 03 NOV, on the stage of the southern FABRIK ALCOHOLIC ALLIANCE DISCIPLES of metal blends with the modern metal TERRORWAY for an evening of live without compromise!

Please note that the concerts will start at 22:00 on time!

ALCOHOLIC ALLIANCE DISCIPLES:
The Alcoholic Alliance Disciples born in 2007. The group defines its own genre playing covers of Black Label Society, Black Sabbath and Down. In 2009 he released a self-produced EP contains 5 pieces. The next two years the group has participated in important festivals and concerts in Sardinia. Between the end of 2011 and beginning of 2012, the line-up undergoes changes and when the group is finalizing the composition of the pieces that make up the first album, scheduled for 2013.

TERRORWAY:
born in February 2009 from an idea of guitarist Ivan Fois, Cosma Secchi on drums and Anselmo Mascia on vocals.
Bassist John Serra comes after subitro to be an integral part of the line up and start working on their first EP “Absolute” in March and April of 2010.
The ep ‘was mastered by Ettore Rigotti (Disharmony Mundi and Slowmotion Apocalypse).
During the making of the ep that contains 5 pieces, the band participated in some festivals like Heavy Sand island in 2009 and Events Metal where they opened the Year of Paul, historical frontman of Iron Maiden.
In 2012, after changing bass player signed to the French label M & O and in September 2012 they released their first full length album entitled “Blackwaters”.
The album draws mixed and mastered by Jacob Olsen (Hatesphere, Moonspell, etc.).