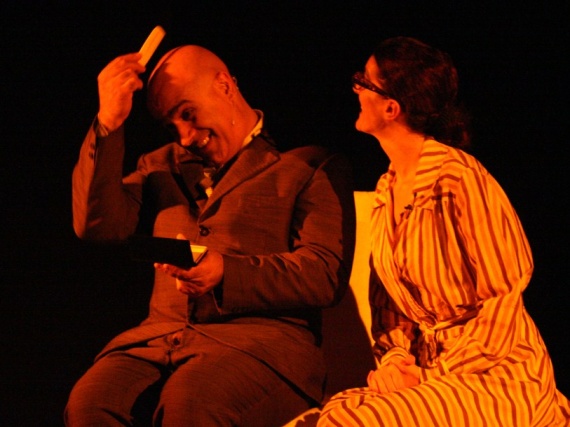 Friday, November 23, 2012 at the Teatro Comunale in Via Goldoni 3 in Elmas, with the show Sa question Tragodia the company, began the eighth edition of Teatrantis in Cuncordia, organized by the Cooperative Theatre Olata thanks to the contribution of the ‘Department of Public education, culture, information, entertainment and sport Sardinia Region.

Since 2004, the Cooperative Theatre Olata organizes the festival in Teatrantis Cuncordia offering theatergoers can see the best of what has been produced in Sardinia in the contemporary theater. The program this year offers eight performances will take place in four Elmas and four Selargius.

The second day of the festival will be the protagonist, again at 21.00, the Cooperative Olata Theatre with the spectacle of E. Ionesco’s The Lesson, directed by Piero Marcialis with Franco Siddi, Marta Proietti Orzella and Rita Pau. The lesson, written between 1949 and 1950 and staged for the first time in 1951, is a comedy drama in which we find the non-sense of the company with the mechanisms that govern it, false teachings, contents empty , ridiculous and laughable, so dramatic. The story takes place in the study of a small apartment owned by a French scholar and obsequious old professor who gives lessons in mathematics, linguistics and comparative philology to a new student. Spectator of what is happening is the ruler of the professor. The strange relationship that develops between teacher and student is the focus of Lesson farce that will eventually end in tragedy.

At 21.00 Sorting Theatre will host The Stories of Young Rebels, and starring Monica Porcedda. Stories of Young Rebels is a show of narrative focused on the events of Corbari Banda, the little partisan brigade in command of Silvio Corbari active during the Second World War in the territory of ForlĂ¬ and Ravenna. The show produced in 2010, was created in collaboration with the ANPI – Provincial Committee of Carbonia-Iglesias.

The last show will be held in Elmas Hello, I’m going to Africa! A project of the cultural Archipelago, directed by Enzo Jacob. Adaptation and direction were treated by Marta Franco Proietti Orzella and Siddi who are also the protagonists of the theater play. The protagonist, Federica fifty-five, in his ironic comparison with an unlikely “Spirit Interactive”, describes the feeling that lives for Him who calls “his one true love”, a boy of thirty years.

Where
Teatro Comunale, Via Goldoni 3, Elmas