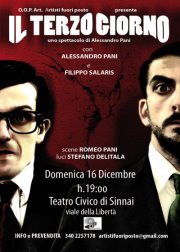 PLOT
Rome in ten years. Revolution. A Montecitorio almost all members of the House have fled for fear of being lynched by the mob. Barricaded themselves for three days in a parliament under siege, two deputies, Antonio Lucarelli Except Biagiotti, two political parties of the ruling coalition, they stayed in their pews to perform their functions. The two are fully intend to live up to the commitment made with Italian citizens, the same citizens who, at that moment, are at the gates of the palace to send them home.

Do you want to see the video of the web series THE THIRD DAY OF MAKING? ->