THE GREAT THEATRE OF CHILDREN – MONSERRATO – OCTOBER 27 TO DECEMBER 29 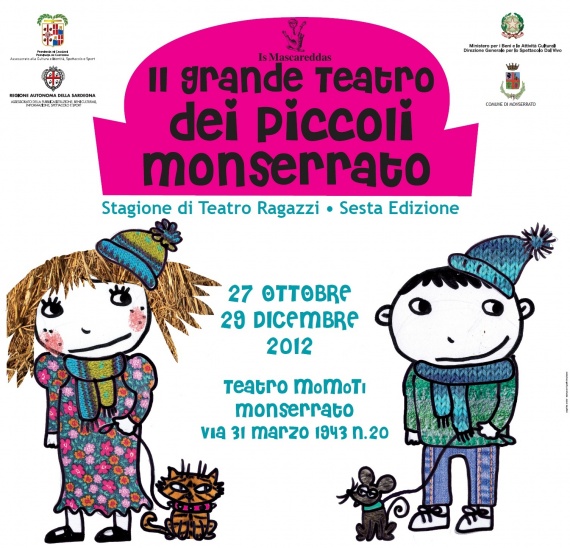 From October 27 to December 29, 2012 is renewed to Momoti to Montserrat, an appointment with The Great Theatre of the Small. The historic season of theater for children and families, created in 2001 by the Society Is Mascareddas.

The formula is established from previous years: a full calendar of events that leads in Sardinia some of the best expressions of national and international theater of animation. Involved some significant innovations to characterize this new theater season, starting with those concerning the room, totally renovated with the help of the Foundation WITH THE SOUTH (within the project Momoti: a theater, a puppet and the city).

On the stage of the new Momoti, the latest work by Is Mascareddas: “FilĂ˛ – stories of daughters and wires,” a show of storytelling with puppets and objects staged by Donatella Pau. They come to Sardinia for the first time the Grupo GATS, from JaraguĂˇ do Sul, Brazil in the north, and the Company Bambabambin from Belluno. Complete the review of Romagna and Abruzzo So Many Projects Tiriteri Theatre Invention.

The program is structured along five weekends in the usual performances on Saturday and Sunday (18:00), flanked by the matinee for schools (Monday at 10:30) and concludes with three evening performances (always at 18: 00) scheduled between Christmas and New Year. 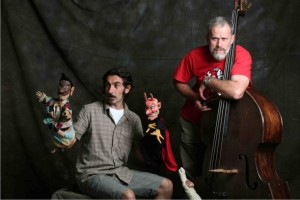 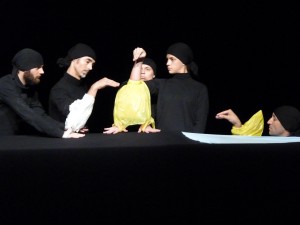 Saturday 26 and Sunday, October 27 (Monday and 28 schools)
The large puppets in view of “The wolf and the seven little kids,” So many of the projects. The piĂ¨ce, written and performed by Danilo Conti and Antonella Pegs, is part of a research project on the figure of the wolf, initiated by the company of Ravenna with “The Three Little Pigs” and “Little Red Riding Hood.”
Saturday 10 and Sunday, November 11 (Monday and 12 schools)
On stage laCompagnia Bambabambin with wooden heads of “Birthday Party”. The animator Paul Rech, joined by musical counterpoint of bassist Nelso Salton, revives on the stage of the tender Momoti Ginetto rabbit, a character born from the imagination of the master puppeteer and playwright Treviso Gigio Brunello, which he directed the show.

Saturday 17 and Sunday, November 18 (Monday and 19 schools)
In the advanced stage of puppets made with black hands and plastic bags from the formation Brazilian Grupo GATS. Are the characters of “O Patinho Feio” show without words and with music based on one of the most famous fairy tales of Hans Christian Andersen: The Ugly Duckling.

Saturday 8 and Sunday 9 (Monday and 10 for schools)
Stage “FilĂ˛ – stories of daughters and wires” Three tales of the Brothers Grimm reworked by Betti and narrated by Donatella Pau Pau with the animation of small toys and objects that she designed herself. The protagonists of the stories of young people who are in some way out in life. To mark their time – a time of spinning, spells, curses and happy endings – are the crowing of a cock, the sun, a bell. The show pays tribute to the beauty of the folk tales of the Germanic tradition in the two-hundredth anniversary of the publication by the two great German linguists.

Saturday 15 and Sunday, December 16 (Monday and 17 schools)
The Invention Tiriteri Theatre presents “The moon and the mouse”, a show of actor’s theater and puppet loosely based on the short story collection “I eat the moon,” the author and illustrator Michael Polish Grejniec. The text runs along the eastern edge of the music, creating a construction game made up of words and images: a colorful papier-mache zoo gradually fills the scene.

From Thursday 27 to Saturday, December 29
The Great Theatre of the Small gives goodbye to the New Year with “gifts” of the Society Is Mascareddas. The play by puppets and animated objects in view, built and animated by Donatella Pau, develops the multiple meanings of the word “gift”, through five micro-stories written for four hands by the interpreter and Betti Pau. 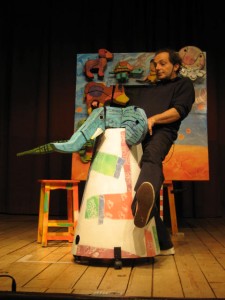 This event is sponsored by:
Is Mascareddas