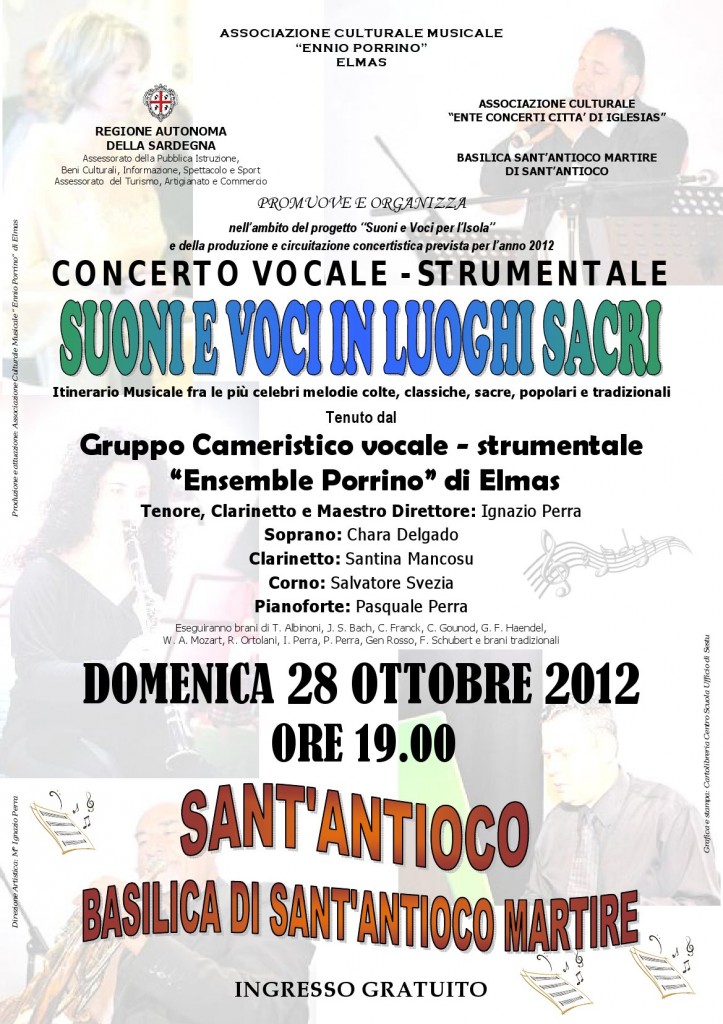 The Cultural Association of Music “Ennio Porrino” Elmas announced that Sunday, October 28, 2012 in Sant’Antioco (at the Basilica of Sant’Antioco Martyr, starting at 19.00) concert will be held vocal – instrumental “Sounds and voices in places sacred – Musical Itinerary of the most famous melodies educated, classical, sacred, popular and traditional “will be featuring the chamber music group” Ensemble Porrino “Elmas (tenor, clarinet and Master Manager: Ignazio Perra, soprano: Chara Delgado, clarinet: Santina Mancosu Horn: Salvatore Sweden, Piano: Pasquale Perra).
The concert is predicted promoted and implemented by the Cultural Music “Ennio Porrino” Elmas (with the contribution of the Autonomous Region of Sardinia, the PI and Entertainment Department and Department of Tourism) as part of the “Sounds and Voices’ s Island “and the production and distribution of entertainment and artistic activities – cultural – music that the Association is doing in Sardinia in 2012 (whose artistic direction is by the M Â° Ignatius Perra) and in reference to the agreement in question as well in collaboration with the Cultural Association “Council of Iglesias Concert City” and the Basilica of Sant’Antioco Sant’Antioco Martyr.
The exhibition provides for the implementation of the most famous melodies of the sacred repertoire, classical, traditional, folk and contemporary (of various age and origin) interpreted as cultured and so acoustic chamber with a workforce specifically designed to get a sound d ‘together can produce an effect and a timbre of particular and immersive sound impact.
Please note that admission to the event is free.