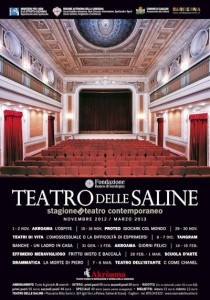 This year, the Season of Contemporary Theatre will take place in the period between November 2012 and March 2013.

The beginning of the Review is expected in the cozy space of the Teatro delle Saline, the day Thursday, November 1, 2012. This
‘s edition includes 8 shows. Among the appearances that characterize the Festival highlight Bebo Storti Banks with the show – like having a burglar in the house, AkrĂ˛ama with the sight of Lelio Lecis Happy Days by Samuel Beckett, Eva Robbins with the show’s homosexual or difficulty to speak, Milena Vukotic with C as Chanel, PierFrancesco Loche with the show Play with the world, The School of Dramatic Arts with the show The death of Piero di Marta Proietti Orzella and always dell’AkrĂ˛ama, the guest with Nunzio Caponio and Simeone Latini.

There will also be a limited number of tickets without assigned seat at a cost of â‚¬ 40.00.

You can buy subscriptions to the season from the day Monday, October 8, at the Teatro delle Saline at the following times:

To reserve a ticket by e-mail, you must have an e-mail address. E ‘can be booked no later than 48 hours before the day of the show, specifying the exact day that you want to be present. Upon receipt of the booking, the Teatro delle Saline will respond * held in Serbian tickets up to 20.30 on the day specified, then reserve to sell. In the case of all places, the applicant will be notified via e-mail.