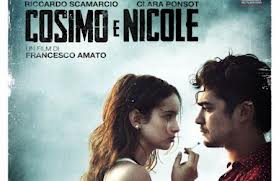 Cosimo and Nicole, suspended between love and pain

Cosimo (Scamarcio) is Italian. Nicole (Clara Ponsot) is French. They know the streets of Genoa during the days of the G8. Between the two bursts suffered a violent passion, uncontrolled, uncontrollable. Both are vagabonds, and independent music lovers. And it is the music that, later, will bring them back to Genoa city where they will start to organize concerts on behalf of a friend. Everything seems to be going well, until one day, an accident puts a strain on their marriage.

The project, on which Francesco Amato has worked for five years is the need to tell the generation under 30, but also the story of two young people in a culture steeped in pessimism and resignation, have the ability to live a carefree their relationship. “I’m homeless and without a real goal that is not the same sake of living together. – Said the director – I do not have ties, are precarious choice, independent, and a little messed up ‘unconscious’.

This implied, of course, an important work of identification by the two protagonists, Scamarcio and Clara Ponsot. A choice is not random, that of the two young performers: “I [chose them to] interpret Cosimo and Nicole because I knew that they could get the physical and emotional intensity (the two sides of the same coin) that was used to the characters do actor’s body on the floor where you draw the story, this was my goal. ” A commitment that – according to the same Amato – the two have now taken very seriously, helping to redraw the first script and create a work that was presented at the Rome Film Festival, won the award for Best Feature Film in the section Prospects Italy. 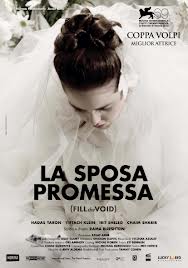 The Bride
Directed by Rama Burshtein.

Awarded in Venice with the Volpi Cup for the protagonist, Hadas Yaron.

The Bride, Israeli film presented at the Sixty-ninth Venice Film Festival in Venice.

Nominated for Best Foreign Film at the Oscars 2013

The first feature of Israeli director Rama Burshtein goes straight to the heart and mind of the viewer because it’s about their feelings and emotions of human beings on any religious or socio-cultural it belongs.

The film tells the story of a death and how this loss destabilize the balance of two families, leading some of them to unreasonable behavior, far from their habits.

We are in Tel Aviv, the protagonists of the story, inspired by true events director, are Orthodox Jews, like the same Burshtein, and their time seems to have stopped several centuries ago, especially with regard to family dynamics and relationships between the both sexes, for example, only men can study the Torah, but not the role of women is diminished, because once she is married to lead the family.

The Bride is an interesting debut that tells from the traditions and values of the Jewish Hasidic, focusing on the story of Shira and how a young girl is being called so early in the face of choices and responsibilities greater than her. All rituals, much followed and respected by all members of the community, trained from childhood to the values of religion, are shown in detail to the audience, so that they enter into the Jewish mentality, in an almost documentary. A culture completely different from the western traditions but with underlying feelings such as fear, love, respect and sacrifice that are universal and Shira, the choice is difficult as it would be for whoever was in the same situation.

The director chooses not to take sides, remains neutral in the choices and shows everything in a free and without any kind of comment. It focuses a lot on their faces, the expressions and feelings of the young protagonists, but despite this, the film does not succeed the way to become involved, often lingers too much on religious rituals and less on feelings. This does not detract, however, the talented protagonist, who, with a face clean and beautiful, a hole in the screen and draws upon all the attention of the viewer.

On weekends it is recommended to book