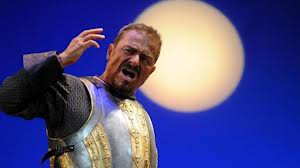 Author: William Shakespeare
Director: Nanni Garella
Genre: tragedy
Company / Production: New Scene-Arena del Sole / Teatro Stabile di Bologna
Cast: Ed. 2012/2013: Maximum Dapporto, Maurizio Donadoni, Angelica Leo, Federica Fabiani, Gabriele Tesauri, Woody Blacks, Matthew Ali Ed. 2011/2012: Maximum Dapporto, Maurizio Donadoni, Woody Blacks, Matthew Ali, Nanni Garella, Federica Fabiani, Lucia Lavia
Description
A military outpost in an area of employment, the Republic of Venice against the Turks, the West against the East: a history already seen, that comes back and builds in the mind of an imaginary war, unfortunately, near and devastating. The moral fiber of a world sorely tested by the harshness of the conflict, with the inevitable impact on the private lives of the protagonists of the noble and virtuous as those mean and evil.

Shakespeare is the only author, after the Greeks, who can give us true tragedies, and Othello, in theatrical history, is one of the few events fully known to the public, especially romantic era onwards. The audience of our time is used to hearing the names, so extravagant and improbable, Iago, Desdemona, Othello, to tie them a story of jealousy and remain bound by blood and passions that move the destinies of those characters. However, knowing the tragic outcome of the story, the contemporary viewer continues to wonder about the fragility of human nature.

Othello is a great debate, deep and exciting: for Othello the world is beautiful, the men are noble, and justify their existence in the loyalty and love, for Iago the world is vile, vulgar and men are like animals, carcasses devouring one another, on the one hand an idea of the world and of human nature that looks coexistence, the beauty and harmony, on the other the total absence, Machiavellian, ideology, pragmatism Empirical most cunning.

No one has the upper hand in the end. In reality, the world looks a lot more like you imagine Iago, but also it is overwhelmed, as Richard III. What remains after the murders, suicides, the collapse of trust, loyalty and love? Probably only the dark night, the dark abyss where it falls sometimes the human mind. The fit of madness destructive and self-destructive, murderous and suicidal, Othello, nourished by lies and infamy of Iago, is the dissolution of a world of values, such as family, home, love, loyalty, moral consistency. As after an eclipse of the sun and moon – extract symbolic image of a baroque – the man remains under an empty sky.

“In Shakespeare’s Othello at the end – says Garella – lose all the nobles and evil: Desdemona, Emilia, Roderigo murdered, suicide Othello, Iago overwhelmed by his own deceptions and its nefarious plots. Everyone makes bad choices. The world does not find its balance after the supreme act of Othello and the sacrifice of his wife, as after an eclipse of the sun and moon man remains under an empty sky. Othello is a great debate, deep and passionate, about human nature: for Othello the world is beautiful, the men are noble, and justify their existence in the loyalty and love. Iago the world is vile, vulgar and men are like animals, carrion devouring one another. On the one hand – concludes Garella – there is an idea of the world and of human nature that looks coexistence, the beauty and harmony. On the other hand the total absence, Machiavellian, ideology, pragmatism empirical most cunning. “

TICKETS / INPUT Via De Magistris, 12
Monday to Friday opening hour before the show.
Saturday, Sunday and public holidays (performance days)
from the 17th to the beginning of the show.