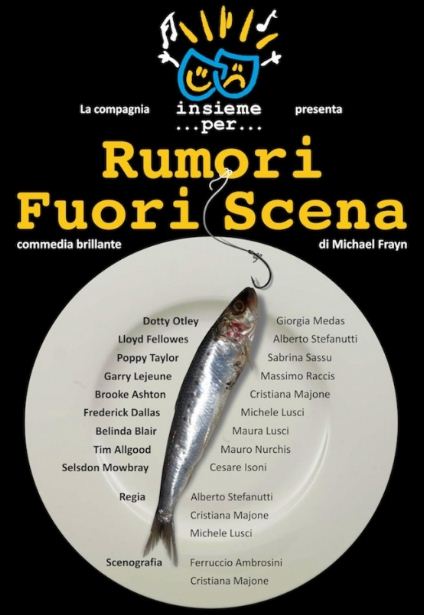 The Cultural Association “Together for …” presents “Noises Off”, comedy in three acts by Michael Frayn.

“Noises Off” follows the misadventures of a dilapidated theater company engaged in the preparation of a farce entitled “With no clothes on.” After a rehearsal rather daunting, start toured across America. The quarrels between the actors and disagreements with the director are reflected in the performance of the play, with results as disastrous as hilarious.
Director’s notes

There is nothing better than being able to enjoy a good plate of sardines to lie on the couch in an old restored mill. Maybe in front of a good movie. But, you know, well-organized plans seem made to be altered, and, in no time at all, a quiet relaxing afternoon turns into a frantic whirlwind of real estate agents, women in dishabille, burglars, sheikhs, a varied assortment of hilarious characters that alternate and meet in the unusual setting of the farce “With no clothes on.”

This is the plot of the show that a British theater company trying to stage. Behind a show so varied and complex, fast-paced and the perfect joints, you need a long and patient work, the result of the commitment and dedication of a group of experienced players, followed in masterly fashion by a talented director. ..

Do you really think so? Get ready to watch from a privileged position in this preparatory work, and the results thereof scenic, with implications unexpected and unpredictable in a growing whirlwind of misunderstandings, mistakes, misunderstandings, teasing behind the scenes and on stage, which inevitably will bring the company close in shambles.

But, remember, when life offers nothing more than pain and uncertainty, there is nothing better than a nice plate of sardines good!

The company was officially founded in December 1995, but by June of the same year its members have created a successful performance of “Come Come People.”

The Company assumed its present name on the occasion of a replica of the same show. Since this is a non-profit company, the receipts of which are donated to charity, you choose precisely “Together for …” from time to time, everyone works together for a common purpose.

The Company introduced several times, in different versions, the musical comedy “Add a place at the table” and “Come on come people,” as well as various other shows, proving a great success with audiences and critics.

Now the Association engages in “Noises Off”, a comedy by furious pace and endless surprises that will amaze the audience.