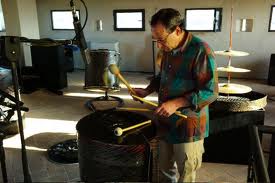 The percussionist Marcello Magliocchi in Sardinia for a short tour, you will Assemini at the Multipurpose Cultural Centre “Space Arka” Saturday, November 17, at 19 for a concert in which only fits into the events InterazioniProject 2012.

Always been interested in exploring the possibilities of percussion instruments, in his concerts Magliocchi builds a sound path in which converge the many influences that have characterized his music experience, in over thirty-year career that saw him side by side, both live in hard, musicians such as Mal Waldron, Peter Kowald, Michel Godard, William Parker, Steve Potts, Joelle Leandre, Gianni Lenoci and many other musicians of jazz, electronics and experimentation. Another important aspect of his poetry is the interaction with the other arts (theater, dance, film) and is often exhibited “ringing” sound installations and sculptures sounding.