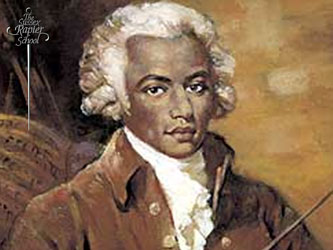 Virtuoso violinist, swordsman excellent and valiant military commander, Joseph Boulogne was also the first African musician to become known and respected in the eighteenth-century Paris. Yet his name was forgotten after his death and only rediscovered today. A musician’s virtuosity is singular dedicated the tenth meeting of the “Music and History at Palazzo Siotto” concerts, lectures and listening guides in the rich program of events that began Tuesday, September 11 and will end on 11 December.

The exhibition, organized by the Fondazione Giuseppe Siotto, this year sees the collaboration of associations” Sounds & Pause”,” The Banquet”,” Euterpe Initiatives Musical”,” Studium Canticum”,” A Tale of Sounds ” Bruno Chamber and Mozart Italy – home to Cagliari. The latter, under the artistic direction of Francesco Giammarco, presents the tenth round, scheduled for Tuesday, November 27, at 20.30, dedicated to the work of Joseph Boulogne.

Born in the colony of Guadalupe from a Senegalese slave and a French nobleman, Joseph Boulogne (1745-1799) moved to France where he soon entered the aristocratic elite. He studied harpsichord and violin, and soon became one of the bn’s most acclaimed musicians of the time. He wrote works of various kinds in the style of Haydn and Mozart, and was nicknamed the “Black Mozart”. E ‘likely that the two musicians also knew personally in the Parisian musical.

“He is not exactly Mozart, writes Gabriel Banat, violinist and scholar of Saint-Georges, but its innovative violin technique makes him a bridge between the Italian virtuosos such as Vivaldi and Locatelli, and Beethoven, in the way of composing for this instrument . He did much for the violin, leading to the knowledge of the great masters of Italian virtuoso technique. “

The appointment is made by the association Mozart Italy – Cagliari and is included in “Music and History at Palazzo Siotto”, organized by the Foundation of Research, “Joseph Siotto.”

Info
Free admission for members of the Foundation Siotto